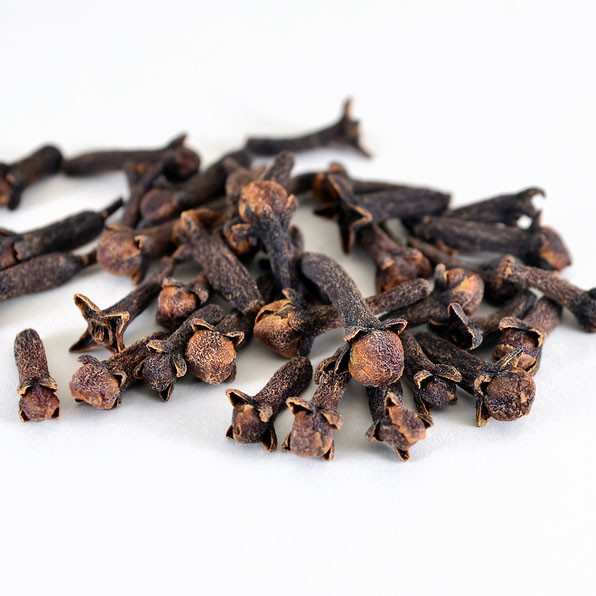 Botany: An evergreen tree 30-60 feet tall that has large oval leaves and crimson flowers.  The flowers are first a pale color and gradually become green before turning to a bright red.

History: Clove along with nutmeg and pepper were highly prized during Roman times.  Arabs traded clove during the Middle Ages and during the profitable Indian Ocean trade.  In the late fifteenth century Portugal took over this trade route and brought large quantities of clove to Europe. The Dutch dominated the trade later in the seventeenth century.

Therapeutic Benefits - Mind: Clovebud is energizing, uplifting, warming, and stimulating. It is an aphrodisiac.

Therapeutic Benefits - Body: Clovebud is an analgesic, antibacterial, and antiviral. It alleviates infected wounds. Clovebud has also been found to be great at relieving toothache pain and arthritis. It aids acne, athlete’s foot, bladder infections, and dental infections. Clovebud can also be used as a disinfectant.

I learned at COBHA that among many oils that can give respiratory relief to asthma and COPD patients, Rose was particularly soothing. I prepared a bowl of hot steamy water for my father to try this. Being physically sensitive as well as emotionally sensitive, we are dealing with his only attachment on earth, his LUNGS, I used one drop. He reluctantly came over to the bowl and remained under the towel tent for an unusually long time. Very quiet. Still more time passed. Eventually, he came out, he… END_OF_DOCUMENT_TOKEN_TO_BE_REPLACED